Since its foundation in 1958, Friedrich Lütze GmbH in Weinstadt near Stuttgart has been developing and manufacturing electronic and electrotechnical components as well as system solutions for automation.

As early as the beginning of the 1970s, the company dedicated itself to systems for control cabinet wiring and introduced important innovations to the market here, with which control cabinet builders saved up to 25% space compared to conventional setups. Today, with the AirSTREAM wiring system, LÜTZE offers a solution that works with a new design approach in control cabinet construction and comes up with numerous advantages in assembly and operation.

LÜTZE's production technology is just as high level as the products themselves. Precision, flexibility and cost-effectiveness are the premises here in order to offer customers precisely fitting solutions. A central role in the assembly was played by a system that assembles aluminum rails with components for cable routing in control cabinets. This had already been in use for several years and was due to be replaced, not least because of the increased volume of orders.

After an extensive search for suitable suppliers, the decision was finally made in favor of MiniTec. According to LÜTZE, the decisive factor was that this company "offered the most coherent and effective concept. In addition, MiniTec was able to guarantee us an absolutely reliable service. This is important for us, because the system is the heart of our production, and we place correspondingly great value on fail-safety and fast, reliable support if things do get stuck somewhere."

There have already been points of contact with the specialists from Schönenberg-Kübelberg. On the one hand, they use assembly tables from MiniTec, and on the other hand, this company has itself been a LÜTZE customer for some time.

As mentioned, the new system is used to attach small plastic particles ("combs") to aluminum rails. The rails prepared in this way are used in control cabinets, where they are then fitted with electrical assemblies. The combs act as cable guides.

First, the combs are divided into two sorting units. The starting point is formed by two containers in which the parts are conveyed upwards by jogging and in this process are brought into the correct position. They are then conveyed downwards again via the outer edge and are each transported to a drive wheel via two parallel linear rails. The drive wheels are driven by a small servo geared motor and push the incoming combs further and further forward under so-called sliders.

The sliders form the guide for the driven combs and press them onto the rails (on both sides of the rail at the same time) in a later process step. There are 15 different rail variants. The length is always different, ranging from 250 mm to 1100 mm (in 50 mm increments - equivalent to the length of a comb).

The desired bar variant is first selected on the HMI control panel. The width of the bar is adjusted manually via a handwheel. The bar is then inserted into the machine and pushed against a movable length stop. This automatically determines the bar length.

The cross-cut fence is equipped with a pneumatic cylinder and pneumatic clamping elements so that the rail is adequately fixed during pressing. For certain rail geometries, a manual clamp is also used to prevent the rail from slipping.

To start the process, a two-hand pushbutton is operated. The sliders move forward and press the combs they have taken along onto the rail. Only as many pushers move forward as the length of the rail. After pressing, the slides move back and the loaded rail can be removed manually.

After acceptance of the system, it was recently successfully put into productive operation at LÜTZE. They are thrilled: "The MiniTec solution allows a significantly higher cycle time and productivity. Today, it takes just 26 seconds to load a rail. At the same time, the intelligent concept ensures a smooth, safe process. Even noise protection has been taken into account, thanks to a special protective housing. With the new line, we are now well equipped for further growth. Due to the good experience, we can only recommend MiniTec as a competent partner for individual automation solutions!" 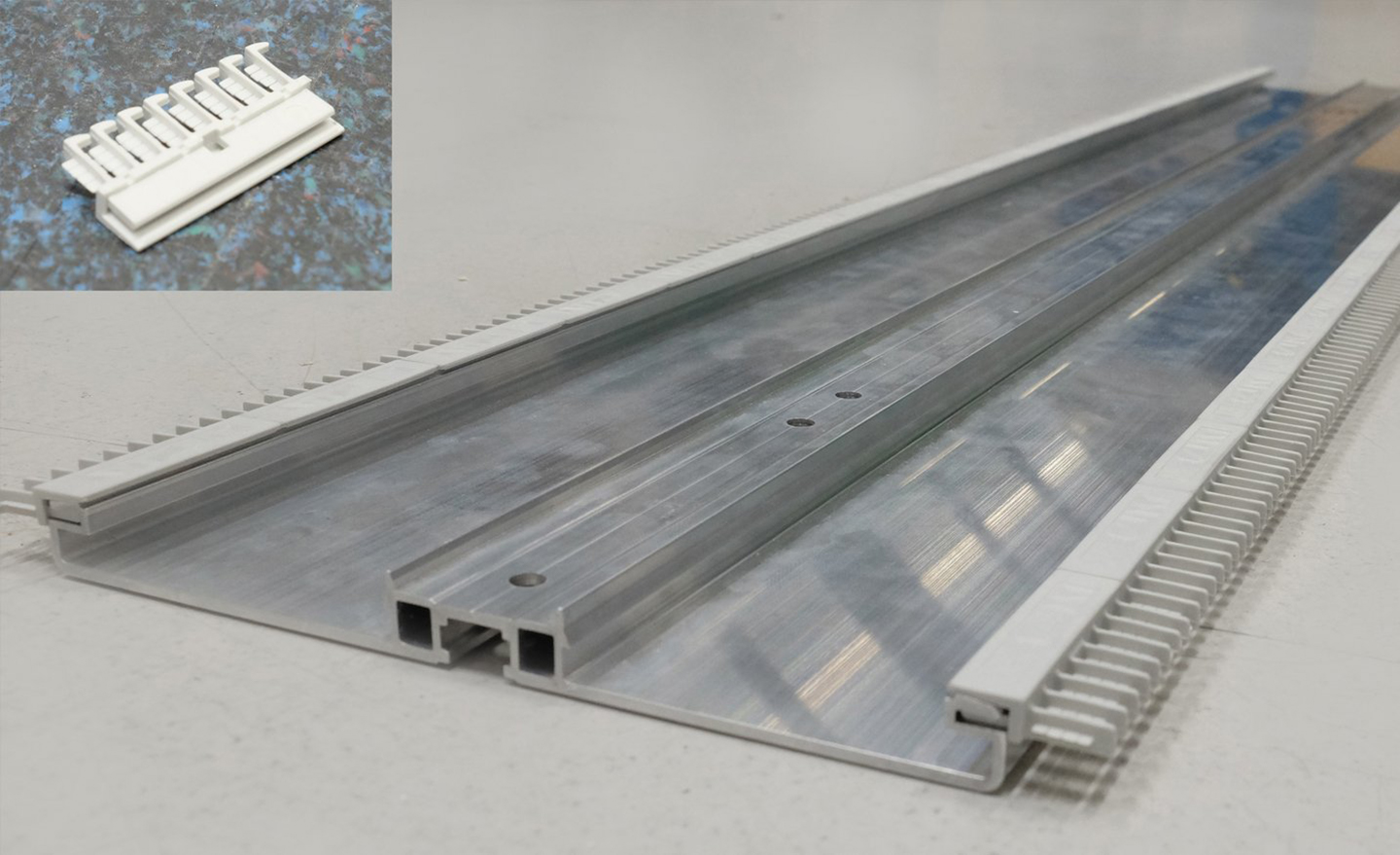 The combs on the aluminum rails ... 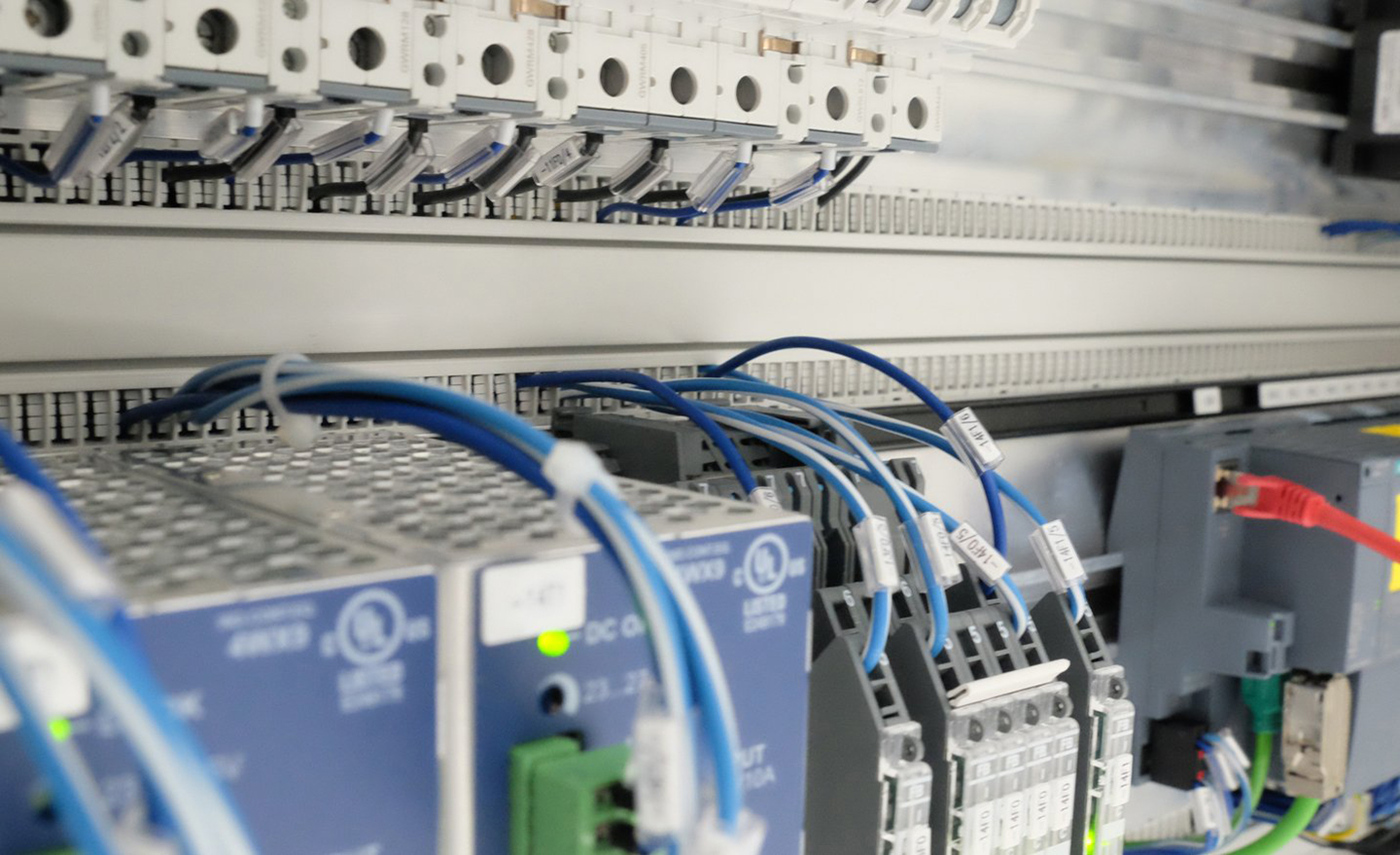 ... are used for cable routing in control cabinets 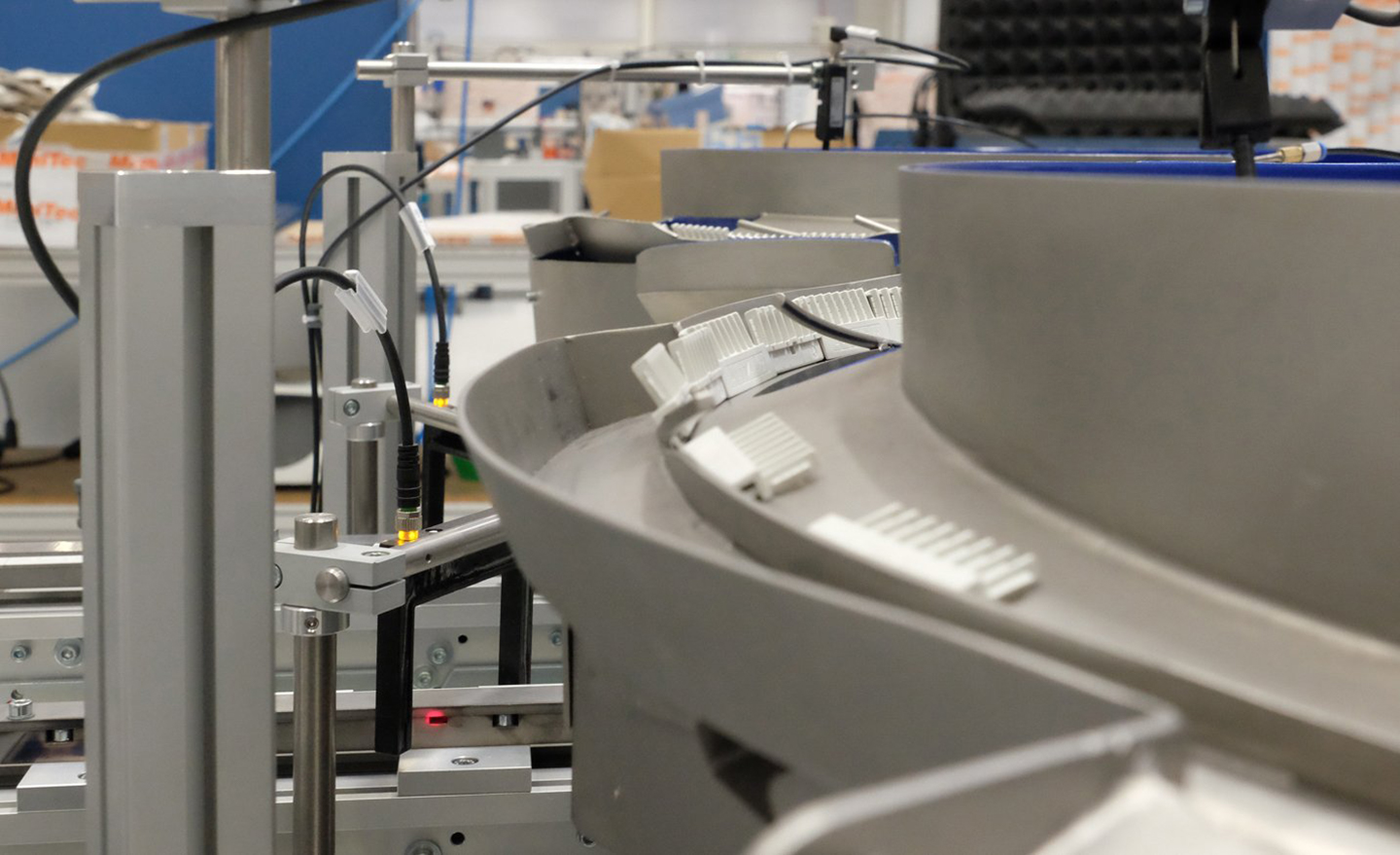 In the "vibrating pots", the combs are brought into the correct position during transport 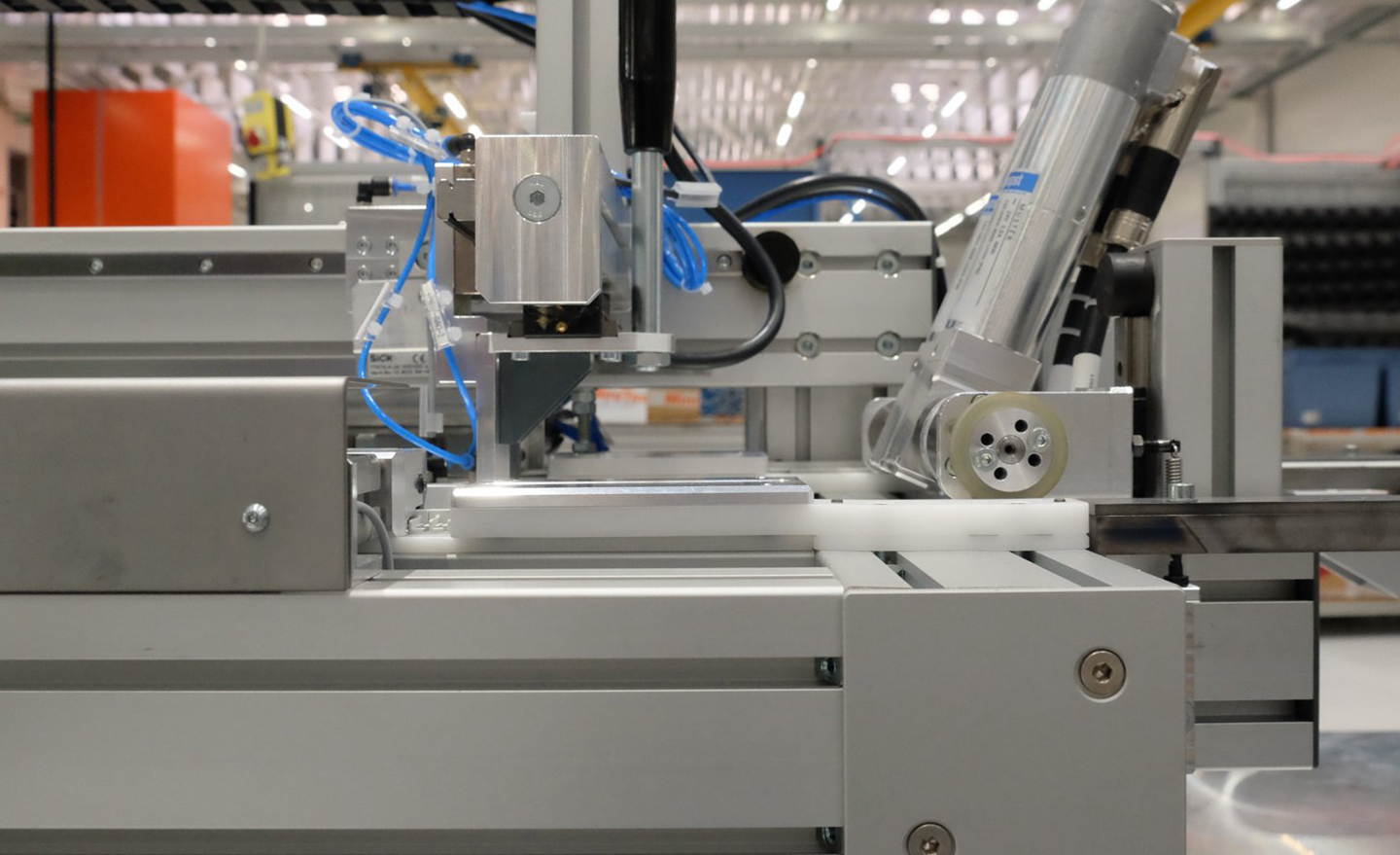 From the vibratory bowl it goes on to the linear section, where the placement then takes place 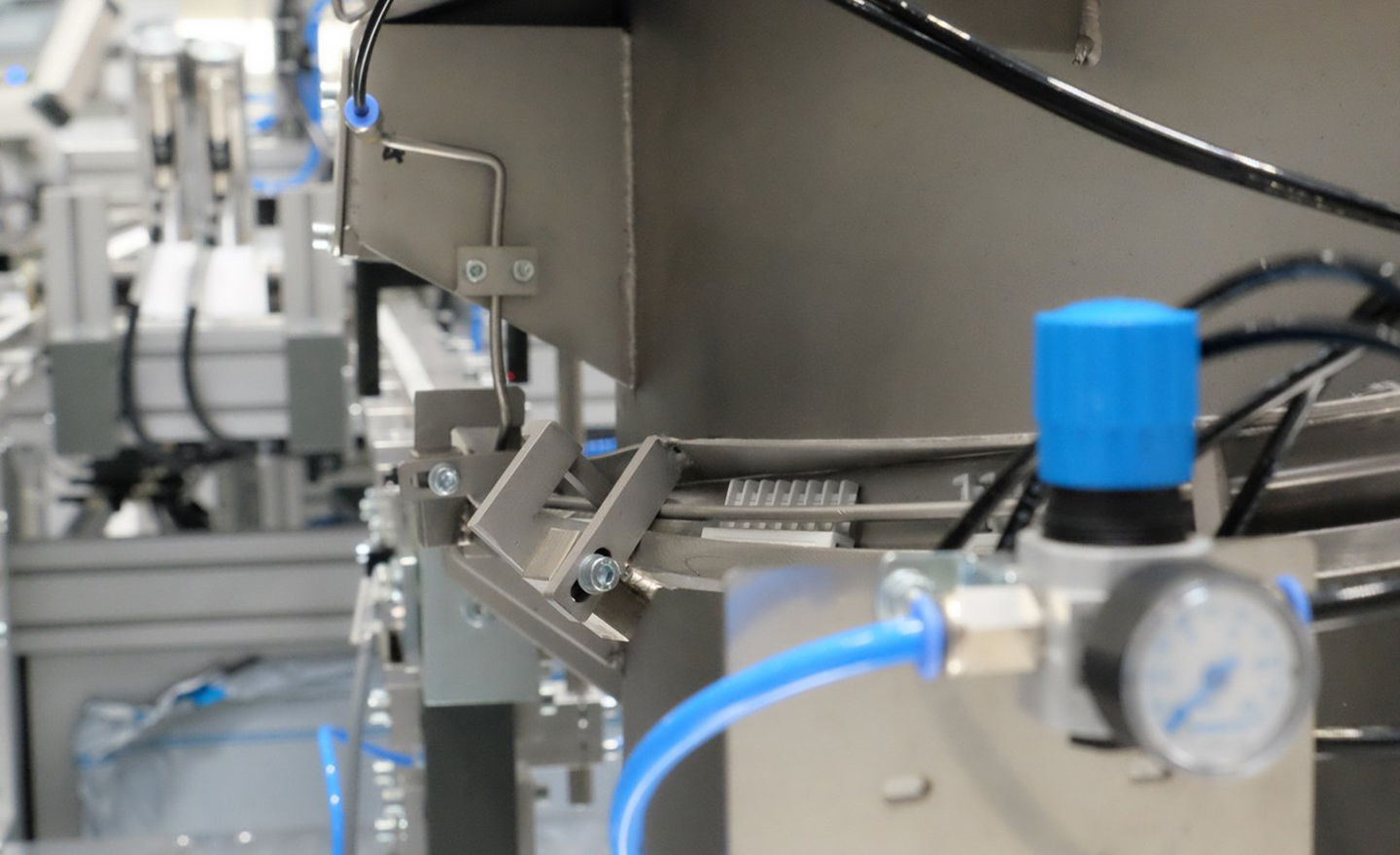 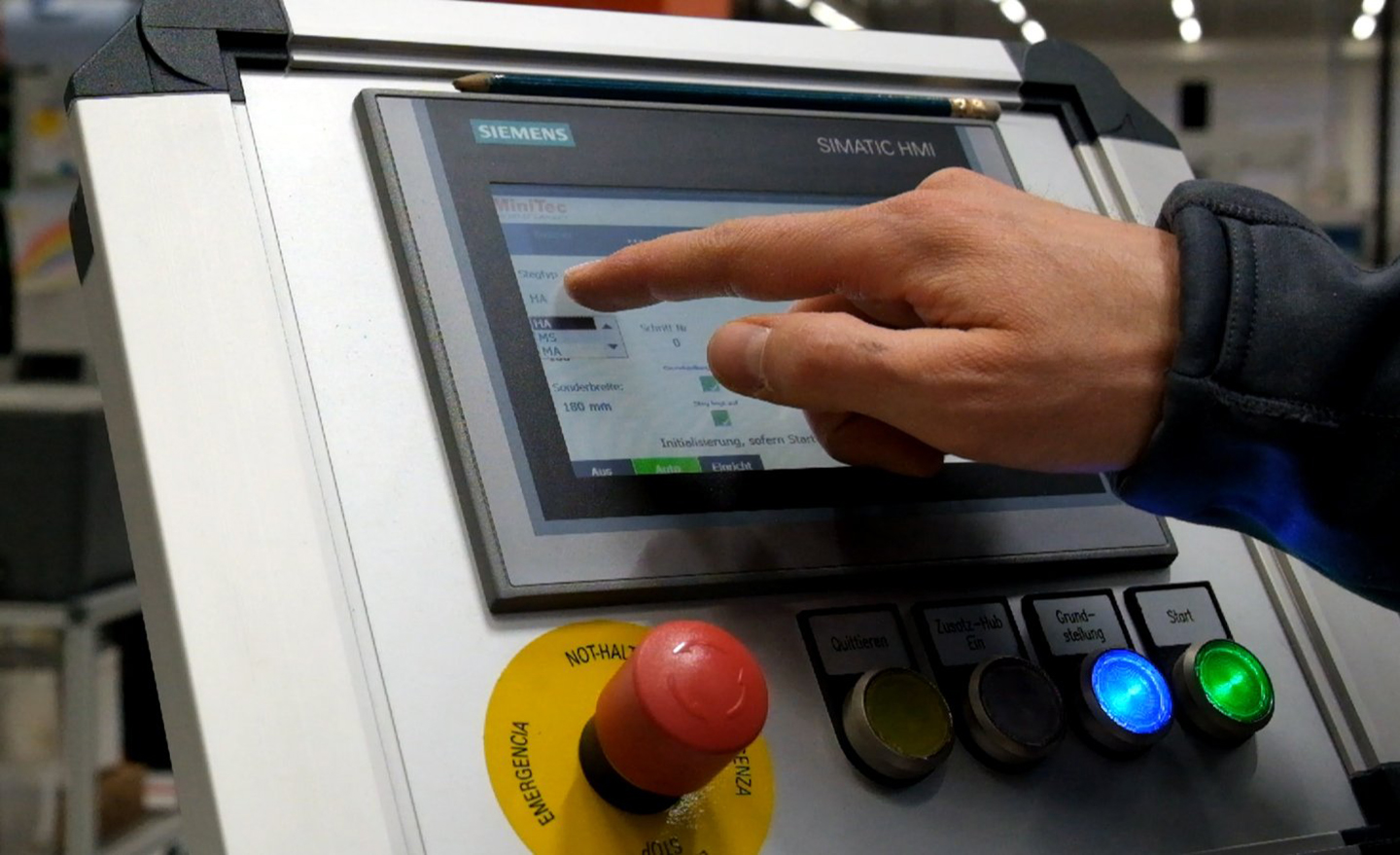 The placement is started via two-hand button

Are you planning a new assembly line or would you like to optimize & automate existing production and manufacturing processes?

Our factory automation experts will be happy to help you!